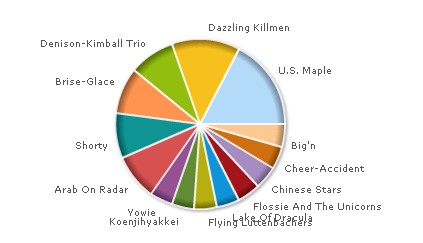 U.S. Maple are the winners of this year’s Skin Graft label poll with 4 votes. Second place goes to Dazzling Killmen (3 votes). The rest of results look the following way:
Denison-Kimball Trio (2 votes)
Brise-Glace (2 votes)
Shorty (2 votes)
Arab On Radar (2 votes)
Yowie (1 vote)
Koenjihyakkei (1 vote)
Flying Luttenbachers (1 vote)
Lake of Dracula (1 vote)
Flossie And The Unicorns (1 vote)
Chinese Stars (1 vote)
Cheer-Accident (1 vote)
Big’n (1 vote)
Other bands  got 0 votes.
It should be noted that this poll did not included some of the act that released some material on the label, but not enough to qualify them as a label’s act (those include Fruitcake, Zeni Geva, Ruins, Strangulated Beatoffs and other bands).
All in all, 23 votes were cast and poll is now closed. Thanks to everyone who voted and, of course, to all the bands that were featured in this poll.
For those you who are interested in polls, you can see the previous year’s Amphetamine Reptile Poll here and poll results here.