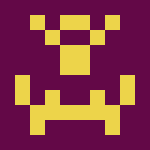 My friends & I have been trying to see DAUGHTERS since at least 2003, especially after that new album fried all our brains properly last year, so we bought tickets for this show as soon as the date was announced back in November. It was a nice bonus when both WOLF EYES and HIDE were added to the bill a couple months later.

Those Wolf boyz are some of my favorite dudes & based on HIDE’s recorded material, i knew they’d be a formidable live act.  I wasn’t wrong, HIDE came out of the gate swinging with a pulsating set of minimal, yet emotional electro-industrial bangers from start to finish.

The room was packed to the brim for this sold out show & even though this was the act most of the audience were likely unfamiliar with, they definitely made an impact. Heather writhed around on stage like a woman possessed, delivering bursts of tortured shrieks between pillows of icy vocals, all backed by the throb of ear rattling electronics that were as dancefloor friendly as they were abrasive.

Next up was the mighty WOLF EYES, i’ll admit right out front that i’m a fanboy for these guys in any incarnation, but seeing them as the duo of Nate & John again was a real treat.

I saw them last year at this very same venue, and while that performance was also excellent & just the two of them, it was quite a bit more restrained in comparison to the set they delivered here.

Tonight they were absolutely on fire, Nate dropping glitchy thuds as John cycled through a variety of inzane horns & homemade gear from an open road case, like artists picking the colors for their canvas as they paint their masterpiece.  Only in this case that masterpiece was an ever fluctuating soundscape of nightmarish proportions, from hints of free jazz to tinges of mutated world music and everything in between, there’s a reason these lunatics are probably the best known American noise act, they always deliver the goods.

Then there was DAUGHTERS…

These folks are the very definition of “cult” act & an anomaly in any genre.

Starting out nearly two decades ago as a grindcore-ish band, they quickly evolved into an absolutely undefinable beast that blurs the lines between noise rock, no wave, hardcore & something much, much weirder over the course of their four albums.  Last year’s big comeback album “You Won’t Get What You Want” alone was a mindfucker of epic proportions & my favorite release of the year.

I think like a lot of folks, i expected them to mainly play stuff off this record, but i’m so glad i was wrong about that.

Over the course of a very chaotic hour, they played damn near everything one could hope to hear from their catalog at this point, albeit some of them very different from their recorded versions, but impressive nonetheless. As they took the stage, most of the band looked unassuming enough, dressed in button up shirts with sharp hair cuts that hid their true intentions, you could almost mistake these lads & lady to be some sort of praise & worship church band gone horribly wrong, and honestly, that wouldn’t be far off from the overall experience.

If this is a cult, then I guess their singer, Alexis, is the de facto “leader” & he lived up to every expectation that comes with that rank. His performance alone was like a cross between a sideshow barker & a deranged doomsday preacher, delivering his message with the venom of a young Nick Cave, all while rocking an almost completely shaved head, save for a thick mullety patch in the very back.

(I heard comparisons about the haircut that ranged from a Hare Krishna look to a strung out Maynard, but in my mind it was closer to Gummo chic than anything else)

They ripped hard from the get go & never let up, cycling through new songs & old, all through the filter of their scummy yet unmistakable sound.

While they never reverted to full on grind/mathcore, the songs from that early era used those sounds as more of ingredients in the mix than for blunt force trauma.

(Think “Disco Volante” era Mr. Bungle as a point of reference for how they use abrasive sounds in this kind of diverse mix.)

The live addition of Lisa on keyboards/electronics/backing vocals is a real nice touch & only elevates some of these tracks to new levels.

The sole female musician in a band called DAUGHTERS, she too was dressed in her best funeral attire & pounded on her gear while waving her hands in the air like an organ player at church feeling the holy spirit move through her. The interplay of vocals between her & Alexis on a few songs were some of the highlights of this show for me.

Honestly, I really never expected I would get to see this band live at all, so to see them on a stacked package like this, on tour for their best album so far & at absolute peak performance level all around, it was a damn good Tuesday night.

Thu Feb 21 , 2019
Spread the love Knife Hits The process of smoking marijuana by heating up the tips of butter knives til they’re extremely hot, taking pieces of bud and pressing them […]