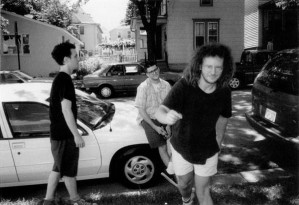 You Fantastic! was a continuation of another band – Yona-Kit – minus K.K. Null and Jim O’Rourke. The band was formed in the late 90s when Darin Gray and Thymme Jones from Y-K teamed up with Tim Garrigan from Dazzling Killmen and together they recorded two EPs and one full-length for Skin Graft label. In a good Skin Graft tradition, they were assigned a cartoon mascot called Curious Brown (who, apparently, was a relative of another member of SG cartoon family called Serious Brown).
They started out by releasing two EPs – 1996 “Riddler” and 1997 “Pals”. Alternative Press described Riddler EP in the following way – “It’s as if someone drew a series of octagons and triangles on a cue card, held it before the trio and said, `Here, play this.’ And they did, with facility, then they snipped out anything resembling harmony, broadcast the result over shortwave radio and re-recorded it onto 56 tracks.”
Their first (and only) full-length called “Homesickness” came out on Skin Graft in 1998. The Wire magazine pointed that the band demonstrates the ability to play “spaced out minimalism with lazily seesawing brass chords”, as well as “splattercore guitar explosions” and they also don’t refuse to let :clanking riffs prepare the way for louder outbursts of guitar”.
Following the release of the album, nothing else was heard from them and members moved on to other projects. Darin Gray played with Grand Ulena and On Fillmore (along with Glenn Kotche from Wilco/Loose Fur/Minus 5), while Thymme Jones continues to perform with Cheer-Accident.
Discography:
Riddler EP (Skin Graft, 1996)
Pals EP (Skin Graft, 1997)
Homesickness CD (Skin Graft, 1998)
MP3: Riddler 1

Tue Feb 10 , 2009
Spread the love Although they were named after an Australian bigfoot, members of Yowie are actually hailing from US (St. Louis, Missouri area, to be […]

First Birthday for I Heart Noise!
Spread the love You Fantastic! was a continuation of another…
Cresta Posts Box by CP
wpDiscuz
%d bloggers like this: