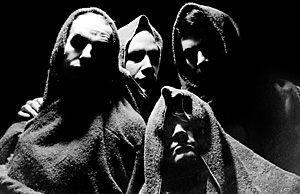 Chicago, IL based US Maple was born out of the ashes of two other bands –  Shorty (which included Mark Shippy and Al Johnson) and Mercury Players (which included Todd Rittman and Pat Sampson). Early line-up of the band also included drummer Jim Kimball (Jesus Lizard, Laughing Hyenas, Mule, Denison-Kimball Trio), but he left and was replaced with Samson.
Band members met in 1995 and started deciding on ways in which rock’n’roll could be destroyed/deconstructed. Their first output was “Stuck / When A Many Says Ow!” single, which was produced by Doug Easley (Silver Jews, Laughing Hyenas, Grifters). Same year, they also contributed their cover of “Sin City” to an ongoing series of AC/DC tribute compilations on Skin Graft.

1995 also saw the release of their debut LP – “Long Hair In Three Stages”, which was produced by Jim O’Rourke. Writer Pierro Scaruffi compared the sound of the album to that of Red Krayola and he also noted that “The sound of the guitars is fractured and incoherent” and “. The songs are not simply “containers” of ideas, they are “swellers” of idea: their role is dynamic, implying growth, rather than static, implying repetition.”
Next year saw the release of “The Wanderer / Whoa Complains” single, which contained one cover (“The Wanderer”, originally recorded by Dion And The Belmonts) and one original song produced by Tom Zaluckyj from Tar. In 1996, they appeared on a massive, double-CD compilation called “Monsters, Robot, Bug & Men”, which came out on Virgin and included tracks by the likes of Windy & Carl, Godflesh, Long Fin Killie, Bardo Pond, Space Needle, Stars Of The Lid and many others.

Their second LP, “Sang Phat Editor” came out on Skin Graft in ’97 and became the last record that the band put on the label. It was also produced by Jim O’Rourke and included appearances by cellist Fredrick Lonberg-Holm and Flying Luttenbachers (with their role being defined as “camouflage”). All Music Guide called it “Much more disjointed than their previous effort” with “every song on this record is full of pull-and-release tension”. AMG also pronounced to be one of their best records.
In 1998 the band left Skin Graft and signed to Drag City label, partly due to O’Rourke’s influence and partly due to a promise of tour support by their new label. Their first record for Drag City was 1999 “Talker”, recorded in Brooklyn, New York with Michael Gira (Swans, Angels Of Light) as a producer and Martin Bisi (Sonic Youth, Swans) as engineer.

“Talker” was described as being darker than its predecessors and All Music Guide pointed out that at the core of the album is  “melted, bluesy avant-rock”. AMG review concluded with the idea that “For all its surface chaos, Talker‘s noise has an underlying space and structure that makes it as compelling as it is initially inaccessible; once caught in its sonic tar pits, it’s fascinating to hear what else is stuck in there.”
2001 “Acre Thrills” was recorded at Pachyderm Studio in Minnesota (other bands that recorded there included Babes In Toyland, Live, Nirvana and The Wedding Present). Pitchfork gave the album 9 points out of 10 and called Acre Thrills “A gorgeously dangerous combination of everything they’ve seemed to strive for that now makes them imperfectly perfect.”
Long-time drummer Pat Samson left the band shortly after the recording of “Acre Thrills” and was replaced with Adam Vida. In 2003, the band released their fifth (and final) studio album called “Purple On Time”, which saw the band abandoning some of the violent intensity of previous records and going with conventional song structures and even verses. The album also included the cover of Bob Dylan’s song “Lay Lady Lay”.
All Music Guide describe the album as being more coherent than “Talker” and “Long Hair In Three Stages” and while the band still sounded as vicious and volatile as ever, some of the songs on the album also had a certain emotional element in them. AMG described the album as being equally good and weird, since the album contained some of the most straightforward material written by the band in years.
Despite some of the good publicity and high profile tours (including the one with Pavement), US Maple broke up after finishing “Purple On Time”. Adam Vida and Todd Rittmann moved on to a new project called Singer, which also involves Ben Vida (Pillow, Town And Country)  and Robert Lowe (Lichens, 90 Day Men).
Members:
Adam Vida (Singer)
Al Johnson (Lake Of Dracula, Mount Shasta, U.S. Maple)
Mark Shippy (Miracle Condition, U.S. Maple)
Jim Kimball (Denison Kimball Trio, Firewater, Laughing Hyenas, Mule, Spinanes)
Pat Samson
Todd Rittmann (Singer)
Discography
Stuck 7″ (Skin Graft, 1995)
Sides 1-4 2×7″ (with Shellac, Big’n and Brise-Glace) (Skin Graft, 1995)
Long Hair In Three Stages CD / LP (Skin Graft, 1995)
Sang Phat Editor CD / LP (Skin Graft, 1997)
Talker CD / LP (Drag City, 1999)
Acre Thrills CD / LP (Drag City, 2001)
Purple On Time CD / LP (Drag City, 2003)

One thought on “A-Z of Skin Graft Records – U.S. Maple”