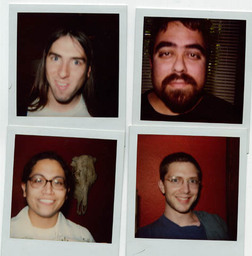 It’s hard for a band to be frightening these days; if it seems like that’s what they’re trying to be, they’re not going to be taken seriously and the most they can hope is that people will think they’re campy. The fear has to work on lower, more visceral levels of consciousness, in inarticulable ways derived from key choices, chords, tempos, and textures. Somehow, Colossamite’s dizzying blend of over-the-top hardcore punk anger, pure noise, and jazzy math rock acrobatics seems to inspire this kind of fear.  – Epitonic

Associated Entries: Deerhoof
Colossamite was a short-lived supergroup from the late 90s that brought together members of  Deerhoof, Flying Luttenbachers and Dazzling Killmen. They released three albums for Skin Graft, but found little commercial success and, as a result, little was heard from them since the release of their 1998 EP “Camera Within”.
The band started out in Minneapolis, Minnesota and included Nick Sakes, Ed Rodriguez, John Dietrich and Chad Popple, almost of whom were Wisconsin natives, except for Sakes. One of their unique features was the lack of bass player.

Their debut was 1997 “All Lingo Clamor” EP, which, according to All Music Guide was much weaker than their first (and final) full-length – “Economy Of Motion”. In 1998 they also recorded a 7″ split with White Tornado (which came out on Italian label Free Land Records) and what turned out to be their last record – “Camera Within” EP that came with a frisbee.
“Camera Within” contained their cover of Die Kreuzen’s “Imagine (Among The) Light”, a track which was later included on Erosion Records tribute to Die Kreuzen called “Lean Into It”. The band also contributed their track “Bewilderbeast” to “Camp Skin Graft” compilation.
After the band break-up, three members of Colossamite formed Gorge Trio, which eventually released records on Skin Graft, as well as Wallace Records and Ache. Nick Sakes went on to play with Sicbay, which also included members of Budd Good.
Band Members:
Chad Popple (Gorge Trio)
Ed Rodriguez (Deerhoof, Flying Luttenbachers, Gorge Trio)
John Dietrich (Deerhoof, Gorge Trio, Natural Dreamers)
Nick Sakes (Dazzling Killmen, Sicbay)
Discography:
All Lingo’s Clamor CD (Skin Graft, 1997)
Economy Of Motion LP / CD (Skin Graft + Free Land, 1998)
Colossamite / White Tornado Split 7″ (Free Land, 1998)
Camera Within EP CD (Skin Graft, 1998)
Compilation Tracks:
“Bewilderbeast” on Camp Skin Graft: Now Wave(!) Compilation (Skin Graft, 1997)
“Imagine (Among The) Light” on Lean Into It (Erosion, 2005)
MP3: Tooth Of DaVinci

One thought on “A-Z of Skin Graft Records – Colossamite”

Do NOT follow this link or you will be banned from the site!
Recommended
A-Z of Skin Graft Records – Chinese Stars
Official Site The Chinese Stars’ sound is to Arab on…
Cresta Posts Box by CP
%d bloggers like this: