Formed by a veteran musician Brad Laner, California band Medicine were an American response to British shoegaze movement – the band crafted songs that consisted of layers of noise, feedback and distortion with pop melodies buried underneath them.

As a teenager, Laner was playing with bands like Nervous Gender and Vox Pop, but eventually he also started listening and becoming influenced by Captain Beefheart, Throbbing Gristle and Residents. By the 80s, he started he started a couple of his own projects, including Steaming Coils and Debt of Nature and for some time he was also a member of Savage Republic.

The 90s saw Laner forming Medicine – a project that was not as extreme as some of his past endeavors, but it was still uncompromising, as it combined melody and noise in the equal measure.

For a new project, Laner recruited drummer Jim Goodall (who at some pointed worked as a session musician for the likes of Flying Burrito Brothers) and a singer Beth Thomas (Four Way Cross). 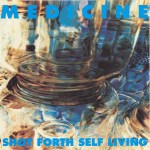 Their debut was 1992 “Shot Forth Self Living” which All Music Guide website saw as a summary of Medicine’s approach to music – “a burst of guitar feedback begins and screeches for longer than one would think tolerable — and then, suddenly, drums and an elephantine bassline emerge and the listener finds that in the midst of all the noise, there’s a beautiful pop song slipping through”.

Next LP that they produced was 1993 “The Buried Life”, which AMG described as a crossover between My Bloody Valentine’s album “Loveless” and Beach Boys “Pet Sounds” – “a catchy, trippy album that aspires to transcendence and sometimes achieves it.” Billy Corgan and Jimmy Chamberlain from Smashing Pumpkins recorded a remix of the track “She Knows Everything” from “The Buried Life” in 1994.

In 1994, the band further solidifed their profile by making an apperance on a soundtrack to the movie “Crow”, which featured appearances by the likes of Cure, Jesus & Mary Chain, Rage Against The Machine and Stone Temple Pilots (the soundtrack also included plenty of covers with Nine Inch Nails rendition of Joy Division’s “Dead Souls”, Rollins Band cover of Suicide’s “Ghost Rider” and Pantera cover of Poison Idea track “The Badge”). The band also made a cameo in the movie – in one of the scenes they shared a stage with My Life With The Thrill Kill Kult.

In 1995 Medicine recorded “Her Highness” – their last album before the band took an 8-year long break. AMG pointed out that while the album was good, it wasn’t quite up to band’s usual standards and they concluded that “There is no shortage of soundscapes on Her Highness, but they don’t soar quite as high as they do on their first two albums.”

While the band was on hiatus, Laner started a new project called Lusk, which included Paul D’Amour (Tool, Replicants), Greg Edwards (Autolux, Failure) and Chris Pitman (Guns’n’Roses, Replicants). The band recorded one single and one full-length called “Free Mars”, both of which came out in 1997.

Laner also started his solo project – Electric Company – the moniker under he which released a number of albums with the most recent being 2004 “Creating Playthings” on Tigerbeat6 label. He also recorded one album under the name Personal Electronics and in 1996 he collaborated with the band Vas Deferenz Organization on the album “Transcontinental Conspiracy”.

In the new millenium, Laner decided to ressurect Medicine and starting from 2002, the band (albeit with a line-up of only Laner and Lee) recorded a string of EPs and singles, as well as one new full-length – “Mechanical Forces Of Love”. The album was radically different from their previous output and was heavily criticized for it – Stylus magazine gave it D+ grade and pronounced that “Medicine’s new album is a hyperactive and clumsy step in the right direction.” AMG pointed out that “the group comes off like a slightly more experimental Garbage, only without the winning hooks. Lee’s vocals are unremarkable, the sound of the record is too busy and obtuse, and they just didn’t write that many good songs.” and concluded that “it’s very hard to make a good comeback album, no matter how much you trick it up with newfangled sounds and weirdness.”

Little was heard from Medicine after they recorded “Mechanical Forces Of Love”, but Brad Laner released “Neighbor Singing” under his own name in 2007 and the record was praised by many including Pitchfork, Treble and Alarm Magazine.

“Candy Candy” on The Fall Of American (American Recordings, 1995)