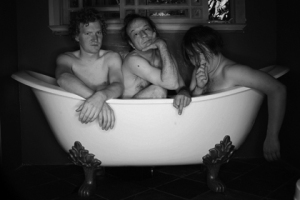 Associated Entries – Jesus Lizard / Scratch Acid
Since the break-up of Jesus Lizard  in the late 90s, singer David Yow was mostly working as a graphic designer, although he never completely abandoned music business. He often guested on Melvins shows and befriended plenty of bands, one of which turned to be Qui (pronounced “Kwee”), a duo of Paul Christensen and Matt Cronk. The two of them met while they were attending an art school in Minneapolis, but eventually they relocated to Los Angeles.
Qui’s debut “Baby Kisses” came out in 2003 on Heart Of A Champion label and was recorded without Yow. The content of the record is described by CD Baby web store as “Running the gamut from slow, dissonant instrumentals to intense, shrieking punk… not for the faint hearted.” and InSound described it as “Nine hungry tracks of slow, dissonant instrumental rockage, wrecked with noise, danger, and enough punk to earn a beating.”
In 2006, Yow finally joined the band as a full-time member and in 2007 they recorded “Today, Gestation/Freeze” single followed by “Love’s Miracle” on Mike Patton’s label Ipecac Recordings. Much of the album was written before Yow joined in, but the album was reworked in order to account for his vocals. Another point related to vocals is that Yow is actually singing on the album, which differentiates it from his work with Jesus Lizard / Scratch Acid, where vocals were mostly screamed/barked or whispered.
Pitchfork Media ended up comparing the band’s work on “Love’s Miracle” with that of bands like Don Caballero, Ween and Lightning Bolt, while The Onion noted that “Love’s Miracle is dominated by abstract dynamics and experimentation more than the calculus-riffing and rhythm lock of The Jesus Lizard.” The record contains two unusual covers – one is Frank Zappa’s “Willie Pimp” and the other is a trimmed version of Pink Floyd’s “Echoes”, but overall most of reviews are noting the fact that Yow-fronted Qui and Yow-fronted Jesus Lizard hardly sound anything like each other, which, in the end, just might be what the band wanted/strived for all along the way.
In 2008, Yow was hospitalized in Pittsburgh after a Miracle Condition / Qui  show at the Andy Warhol Museum. He suffered a collapsed lung, but made a full recovery, although the incident was followed by Qui guitarist Matt Cronk suffering three strokes. Apparently, both of them are doing better, although its unclear what’s happening with the band at the moment and since Jesus Lizard are going to do a reunion tour in 2009, the band is probably going to be put on a backburner for a while.
[youtube=http://www.youtube.com/watch?v=NAGCEaM8T-M&feature=related] Willie The Pimp (Live)

Fri Dec 19 , 2008
Spread the love [nextpage title=”Biography” ] Oakland, CA based Xiu Xiu (pronounced “shoe-shoe”) is a brainchild of California native Jamie Stewart, who is exploring all […]
I Heart Noise