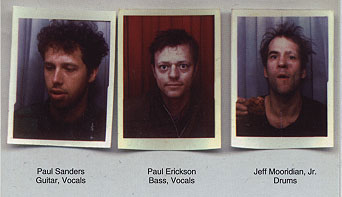 “With power and intensity to spare, post-punk hard rock trio Hammerhead could as easily have been called “Sledgehammer” (even if a heavy metal outfit from England hadn’t beat them to it).” (All Music Guide)

The story of Minneapolis, MN based trio Hammerhead is tied to a whole number of bands out of Fargo, ND – December’s Children, Floored, Ditty Wah Ditty (which included Mike Kunka from Godheadsilo) and Buttchuck. None of them ever produced any official releases,  but the core of all bands consisted of Paul Erickson, Paul Sanders and Jeff Mooridian…

All three of whom moved from Fargo, ND to Minneapolis, MN in the late 80s and after taking into consideration a whole number of musical and non-musical sources (Stooges, MC5, Dinosaur Jr., Husker Du, Travis Bickle from “Taxi Driver”) they started recording singles/albums for Amphetamine Reptile Records.

Their first full-length was 1992 “Ethereal Killer” (preceded by 1991 U.V./Peep 7″, with an artwork by Chris Mars from Replacements) , which (as title suggests) was all about homicidal rage/anger and was chock full of insanely fast hardcore tunes. Not unlike Husker Du (to whom they paid tribute on “Du Huskers” compilation with a cover of “Something I Learned Today”), in the beginning they were all about speed and intensity, while their later albums introduced more focused songwriting.

1993 “Evil Twin” EP collected 4 tracks from 7″ single of the same name, 2 tracks from debut U.V. / Peep 7″ picture disk and re-recorded version of Load King. 1994 full-length “Into The Vortex”, although less focused on violence/hatred, than its predecessor, still sounded as vicious as ever, with an instrumental “Galaxy 66” thrown in for a good measure.

Sanders left the group in 1995 and although successful replacement was replacement was never found, they still managed to release “Duh, The Big City” in 1996, which also became their swansong.  Taking a page from the likes of Chrome, “Duh…” proved to be more experimental than their previous records. Craig Klaus from Australian band King Snake Roost took the place of departed Paul Sanders.

Eventually, however, Paul Erickson and Jeff Mooridian simply abandoned the old name and rechristened themselves Vaz. They been recording as a duo since the late 90s and are still active today, while both of Paul Sanders post-Hammerhead bands (More Ram, Fly Republic) proved to be short-lived – More Ram produced one 7-inch for Meat Records, while Fly Republic never had any official releases.

Into The Vortex LP/CD (Amphetamine Reptile, 1994)

“Gremlin Stomp” on Dope, Guns And F—ing In The Streets Volumes 4-7 (Amphetamine Reptile, 1991)

“Something I Learned Today” on Du Huskers (Synapse Recordings, 1993)

“Something I Learned Today” (original by Husker Du) on Du Huskers (Synapse Recordings, 1993)