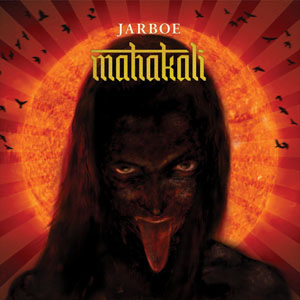 And The Sky Which Once Was Filled With Light…

The House Of Void (Visceral Mix)

From Afar, Upon The Back Of A Tiger

A Sea Of Blood And Hollow Screaming…

“The idea of a ‘goddess of destruction’ is one that I’ve cherished for a long time. Cedric [Victor, bassist and visual collaborator] mentioned Kali when we were recording because of the thematic similarities to the songs I had already written,” says JARBOE. “As we progressed, everything seemed to come together around this theme of respect/reverence for strength and simultaneous repulsion/fear of power. Kali’s narrative also discusses Nietzsche’s old adage that ‘in fighting the monster, one must be careful that one does not become the monster’ which seems to be a relevant message.”

Associated Entries: Swans
Although she’s mostly known as one of the two constant members of now-defunct Swans (the other being Michael Gira), Jarboe (born Jarboe De Salle Deveraux) also recorded numerous solo records and collaborations with other artists, including Neurosis and Byla (a duo of Colin Marston and Kevin Hufnagel, both of whom are also members of instrumental rock band Dysrythmia). It shouldn’t as a complete surprise then, that her latest full-length “Mahakali” includes contributions from numerous rock artists.
“Overthrown” features a vocal contribution from Phil Anselmo (Down, Pantera, Superjoint Ritual, Viking Crown) and in their review of the album Re Gen Magazine characterized the track as ” an almost bluesy, semi-acoustic number that brings Anselmo’s distinctive rumble to the foreground” and pointed out that “Mahakali also features a reprise of the song with Jarboe not only singing lead, but also faithfully replicating Anselmo’s affected delivery and throaty yet clipped pronunciation.” Re Gen gave the album 3.5 stars out of 5.
Other artists that appeared on the album/contributed to it include Kris Force (Amber Asylum, Culper Ring, IAO Core), Josh Graham (Neurosis), Vinnie Signorelli (Swans, Unsane, Lubricated Goat) and Atilla Csihar, who contributed his  vocals to “The Soul Continues” track.
MP3: Mahakali Or Terrifying Countenance