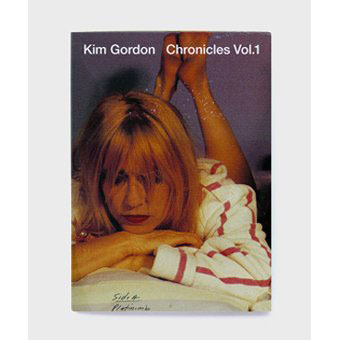 Born: April 28, 1953
Place Of Birth: Rochester, NY
Role(s): Singer / songwriter/ fashion designer
Her bands (other than Sonic Youth):
Ciccone Youth – 80s band that included all members of  Sonic Youth (plus Mike Watt from Minutemen/Firehose). They covered Madonna’s “Into The Groove”, among other things.
Free Kitten – 90s band that paired Kim with Julie Cafritz (of Pussy Galore fame), Mark Ibold (Pavement) and Yoshimi from Japanese band Boredoms.
Harry Crews – Early 90s band that included Kim, Lydia Lunch and Sadie Mae. They produced one record called “Naked In The Garden Hills”, which was named after a novel and consisted of the live recordings of the shows that the band played in UK and Austria.
Mirror / Dash – A side project of Kim and Thurston Moore, which produced just one single in 1992. The project was resurrected in a new millennium, however and released plenty of 7-inch and 12-inch records (as well as one CD/full-length) for such labels as Three Lobed Recordings and En/Of.
Thurston, Kim And Epic – As name indicates, this was a collaboration between Kim, Thurston and Epic Soundtracks from Swell Maps. The band recorded two tracks for tribute compilations – one was a cover of Beat Happening’s “Black Cookie” (which appears on “Fortune Cookie Prize” compilation) and the other one was a cover of Dylan’s “Sitting On A Barbed Wire Fence” (which appears on “Outlaw Blues” compilation).
Discography:
Stairway / Is It My Body? (Self-Released, 2003)- A DVD-r in limited edition of 10 copies , which includes a video of Kim performing both pieces.
Perfect Partner (Electra Editions, 2005) – A collaboration between Kim, Ikue Mori, Tim Barnes, DJ Olive and Jim O’Rourke.
Keffer Gordon Moore (Ecstatic Peace!, 2008)- A collaboration between Kim, Thurston Moore and Leslie Keffer.
Noise Hello Kitty (Self-Released, 2005) – A project that was created for Hello Kitty’s 30th Anniversary Show at Mori Art Museum in Japan. It involved Coco Hayley Gordon Moore (daughter of Thurston and Kim), Chris Corsano and, of course, Kim and Thurston themselves.
Selected Compilation Tracks:
“Working Youth” (from Just Another Asshole – 1981/1995) – a collaboration between Kim and Stanton Miranda which appears on “Just Another Asshole” compilation.  “JAS” was edited by Barbara Ess and Glenn Branca and included contributions from all the future members of Sonic Youth, as well as a number of works by other New York artists.
“Kitten” (from Guitarrorists – 1991) – Kim’s solo track from a compilation that included only solo tracks by the likes of SY’s Thurston Moore, Don Fleming (Half-Japanese / Dim Stars), J Mascis (Dinosaur Jr.), Kat Bjelland (Babes In Toyland) and many others.
“Loren’s Birthday” (from Live At Tonic Vol. 1 – 2002) – A collaborative track which Kim recorded with Loren Mazzacane Connors.
“Water / Water ||” + “Raft / Magic Village” (from How To Make A Stone Knife – 2005) – A compilation which includes tracks recorded for “magic village cosmic wonder” exhibit in Eindhoven, Netherland, which took place in June of 2005. Compilation includes two solo tracks from  Kim and a collaboration between Kim and the band Meditations (as well as tracks by Animal Collective, Lemuria and Yoshimi from Boredoms).
“Wriggle Like A Fucking Toe” (from Broken Brain – 2007) – A solo track that appears on a compilation from an experimental UK label Chocolate Monk.
“Song For Reverse Karaoke” (from Sensational Fix – 2008) – 2 vinyl singles that include 4 tracks recorded by each individual member of SY.
Songs that mention Kim:
“Kim Gordon’s Panties” by Rapeman (“Two Nuns And A Pack Mule”, 1989)
“Kim Gordon Blues” by Such Sweet Thunder (“Redneck / Burning Ditches”, 1992)
“Call Kim Gordon” by Bunny Brains (“Box The Bunny”, 2004)
“Kim Gordon And The Arthur Doyle Hand Cream” by Sonic Youth (“Sonic Nurse”, 2004)