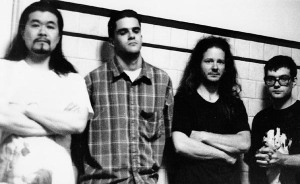 Yona-Kit was a one-off collaboration between members of American band Brise-Glace (Jim O’Rourke, Darin Gray and Thymme Jones) and Japanese guitarist KK Null. They released one self-titled album, which came out on Skin Graft in 1995 and was produced by Steve Albini (Big Black, Rapeman, Shellac).They also contributed few compilation tracks to various albums and even had puppet mascots associated with the band.
Yona-Kit was also a supergroup of sorts, as all members were veterans of music scene – O’Rourke worked with anyone from Red Krayola to Sonic Youth, Gray was a member of Dazzling Killmen, Thymme Jones was a member of Cheer-Accident and K.K. Null was in Zeni Geva (he also collaborated with O’Rourke on the album “New Kind Of Water”). The album features appearance from Melt-Banana lead singer Yasuko Onuki on “Franken-bitch”.
According to legend created by Skin Graft founder Mark Fischer, the band was formed when members were on a cruise near North Pole. Their vessel capsized and whale ate the band, but later regurgitated them and the band wrote all of the ir songs while being trapped inside of whale’s belly.
All Music Guide compared the band’s sound with that of Albini’s band Shellac as well as fellow Skin Graft act Shakuhachi Surprise. AMG also pointed out that the band “wasn’t as heavy as Zeni Geva, but also wasn’t as light as Brise-Glace.
Following the release of one album and few compilation tracks, Yona-Kit disappeared for good and Gray and Jones combined forces with Tim Garrigan (Dazzling Killmen) in You Fantastic! O’Rourke went on to work with the likes of U.S. Maple, Sonic Youth and Loren Mazzacane Connors.
MP3: Frankenbitch

First Birthday for I Heart Noise!

First Birthday for I Heart Noise!