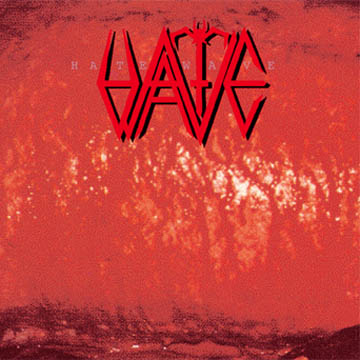 Weasel Walter is an extremely prolific musician and throughout years he worked with countless bands (Lake Of Drakula, Flying Luttenbachers, XBXRX and others). Most of them, however, were on an experimental/avant-garde/free jazz side and it might come as a surprise, then, that Hatewave was a straight-ahead metal band.
Trio consisted of Walter,  guitarist Sasha Tai (Sasha Lindquist) and Angst (Mark Rucker). Their self-titled debut was recorded in 1998 (with the help of Brian Griffin from Broken Hope) and came out as a joint release between Up Jumps The Devil and Skin Graft.
Throughout the late 90s, they toured with the likes of Nile, Napalm Death, Fleshgrind, Usurper and Incantation, but broke up in 1999. In 2000, tUMULt label released their first and final record with three bonus tracks from the band’s early demo tape.
2008 saw the release of Sexual Healing 2, a CD reissue the bands original 1994 4-track  demo (with an appropriately disgusting cover art), which was recorded with Weasel and sounded very different from their debut.  The album was described by Savage Land Records  as being an “essential document of the Chicago No Wave scene of the 90s. ” and a  “hardcore/no wave hybrid, (complete with blast beats and cheap casio sampler), that has very little to do with the death/black/prog version of Hatewave Sasha Tai went on to form a few years later.”
Discography:
Hatewave CD / LP (Skin Graft + Up Jumps The Devil, 1998 / tUMULt, 2000)
Sexual Healing 2 CD (Apop, 2008)
MP3: Desire To Kill