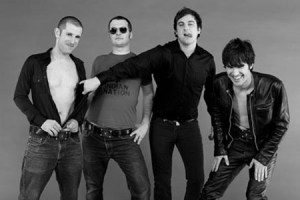 The Chinese Stars’ sound is to Arab on Radar what Hair Police might be to Low – well, maybe not that dramatic of a difference, but still. There are choruses. There are melodies. In fact, there is such a steady beat that you can dance in the security that you won’t be jeopardizing your Disco Stu status to some unforeseen shift in rhythm. – Dusted Reviews

Along with Made In Mexico and Athletic Automaton, CS are one of the bands that formed in the wake of dissolution of Arab On Radar. Initially the band included former AOR members  Craig Kureck and Eric Paul, along with Paul Vieira and Richard Ivan Pelletier from Six Finger Satellite (who was eventually replaced with V. Von Ricci). They were named after a Chinese Star Epidemic of the 80s, a fad that had to do with American kids being obsessed with shurikens, ” shrunken” throwing stars and effect that this had on terrified parents.

Their debut was “Turbo Matress” EP,  which came out on Skin Graft in 2003 and was reissued by the same label in 2007. Semtex Magazine gave the record 8 points ouf 10 and characterized the record as “a fuck you to standardised rock music.” and pointed out that “this ep illustrates the power of dance played with drums, a guitar and a bass”.  Their other EPs/singles include 2004 “Cheap City Halo / Girls Of Las Vegas” 12″ (which came out on ArtRocker label) and 2005 “T.V. Grows Arms / The Drowning” 12″, which came out on Kitty Play Records.
Both of their full-lengths – 2004 “A Rare Sensation” and 2007 “Listen To Your Left Brain” – came out on Three One G Records (although Skin Graft also released a vinyl version of “Listen…”). “Listen To Your Left Brain” was described by Scenepointblank website as “One part noise punk swagger, two parts Arab on Radar eccentricity, and two parts infectious dance punk”, while Sputnikmusic compared their sound on “A Rare Sensation” with that of Minutemen, but “weirder, slower, and  far more danceable.”
Band Members:
Craig Kureck (Arab On Radar)
Eric Paul (Arab On Radar)
Paul Vieira
Richard Ivan Pelettier (Six Finger Satellite)
Discography:
Turbo Matress EP CD (Skin Graft, 2003 / 2007)
Cheap City Halo / Girls Of Las Vegas 12″ (Artrocker, 2004)
A Rare Sensation LP / CD (Three One G, 2004)
T.V. Grows Arms / The Drowning 12″ (Kitty Play, 2005)
Listen To Your Left Brain LP / CD (Three One G, 2007 / Skin Graft, 2007)
Compilation Tracks:
“Eyes Of The Secret North” on Blueghost Party Flavour (Skin Graft, 2005)
“The Plague” on Release The Bats: The Birthday Party As Through The Meat Grinder Of Three One G (Three One G, 2006)
Reviews:
Turbo Matress EP – Porcys/ Dusted Reviews
A Rare Sensation – Sputnikmusic
Listen To Your Left Brain – Scenepointblank

Mon Jan 12 , 2009
Spread the love MySpace Page It’s hard for a band to be frightening these days; if it seems like that’s what they’re trying to be, […]