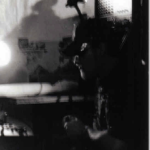 Caterpillar Party isn’t a band that I would typically listen to, but would recommend to those into quirky type light punk / upbeat experimental bands. The sound of the band varies, which is good and works in their favor, not all 5 songs sound like the one that just played. Yetti Confetti and Shark Marathon are both instrumentals, while I’d Like To Take This Opportunity To Make Pop-Tarts and Tera-Dactal Head include vocals swinging from a nervous Josh Homme to the guy from McRad.
I did like the production of the drums, reminiscent of Shellac type stuff, very open and dry. Guitar and bass work fall into Descendants, more recent Dead Milkmen and Schlong category, with punchy quirky riffs and the occasional extended chord / tremlo picking a la Explosions In The Sky. All songs are well constructed and executed with Shark Marathon being the best track for me. Go to their Bandcamp page and check them out.

Tue Nov 1 , 2011
Spread the love Chuter is Jack Chuter, from Basingstoke, England. He describes the music he creates as a sort of introspective, texture-thick mesh of post-metal, […]