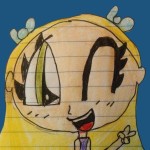 Sean Caldwell
Spread the love
Pink was my introduction to the Japanese rock-of-all-trades trio known simply as Boris, this name inspired by a Melvins track as mired in sonic muck as the band’s output would come to be known. Considered a milestone release by many, myself included, 2006’s Pink could be seen as the group’s own Vol. 4, (Black Sabbath for those who don’t know), a record that not only enabled Boris to explore its budding versatility, but also allowed the group to flirt with pop-ready accessibility. With Pink you’ll find pensiveness (“Farewell”) and brawn (“Woman on the Screen”), dissonance (“Blackout”) and solitude (“My Machine”), sedate psychedelia (“Afterburner”) and filthy hard rock (“Six, Three Times”). And, for me, it is that demo-tape similar level of aural grit and grime that unifies this otherwise multifaceted rock album.

Following Pink, Boris has been making hook-driven guitar rock of the arena-level and glam-sweetened varieties and crafted some dance-centric pop music. In addition to the group’s own continual evolution, Boris has also capitalized on their proficiency and adaptability to collaborate with artists as varied as Merzbow, SunnO))) and The Cult’s Ian Astbury. With that said, to listen to Pink ten years later, is to hear a band in transition, readying themselves for a new era of creation.
Observing that ten years have passed since the album’s release in the U.S., Sargent House, the band’s current label, saw fit to reissue the album as an expanded deluxe edition, featuring lengthier edits of “Farewell,” Pseudo-Bread,” and “Just Abandoned Myself.” The reissue has also been appended with nine additional tracks, which are compiled together as a companion album called Forbidden Songs. This collection was recorded during the Pink sessions and had apparently gathered dust up until they were curated and mastered for the purpose of accompanying the reissue. And while the additional tracks certainly provide interesting context into how much material the band had recorded during this prolific and certainly robust period, and also offers incentive to anyone who already owns the album to purchase it again, Pink still sounds great with or without the extras.

That being said, though, I happily purchased a copy of the triple-LP. And after hearing Forbidden Songs, it’s difficult to understand how these tracks didn’t wind up on some subsequent releases. By itself, Forbidden Songs plays cohesively enough to have comprised another fully realized LP from Boris, the space-inductive Hawkwind blues of “Your Name Part 2” relatively calm next to the drone-turned-thrash of “Heavy Rock Industry” or the revved up Motörhead-centric onslaught of “SOFUN.” The fact that Forbidden Songs is packaged as a companion piece is actually kind of unfortunate given how well it works on its own.
As rampant as reissues have run in recent years, though, given that every year seems to unlock a wealth of anniversary editions of whatever the fuck and the expected wave of cynicism that this type of nostalgic pandering often cultivates, I have to say that Sargent House made a good choice unearthing these tracks. If for no reason other than to have been able to hear something like “Talisman,” with its corrosive drone interpretation of Iommi-gone-Melvins, or the deep psych rock bliss of “N.F. Sorrow,” I couldn’t help but feel grateful.

Getting back to Pink, though, there is a consequence to including longer cuts, namely its track sequencing, which is kept as it was originally for the digital release. When I first listened to Pink in its entirety, the tonally rich and enveloping “Farewell” had me captivated, completely lost in swathes of blanketing sound and singer/guitarist Takeshi’s impassioned wail. And then, the title track would abruptly put an end to the haze, its immediacy and riff-dominated stride a shock the first time I’d heard it. This combo was what first had me enamored of Pink, its slow welcome followed by a kick in the ass. For the vinyl version, this sequencing is sacrificed for necessity’s sake, the new track lengths requiring more room per side. It’s a small criticism, certainly a purist’s leap into the realm of first world problems, and nothing that should dissuade anyone from acquiring this otherwise well-packaged and wonderfully reconsidered album.

Sun Aug 7 , 2016
Spread the loveKolumbus (real name Mark ‘Cappy’ Caplice) is an emerging artist in Ireland, whose singles Leave the Light On and I Hope You Find […]