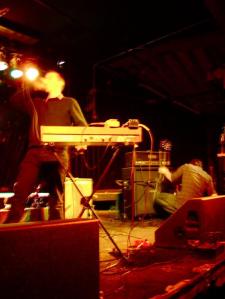 [nextpage title=”Biography” ]
Locrian is a Chicago-based duo of Andre Foisy (Break Of Dawn, Unlucky Atlas) and Terrence Hannum (City Of Liars, Unlucky Atlas), which so far recorded numerous tapes, CDr and one CD for such labels as BloodLust!, Catholic Tapes, Pilgrim Talk and Diophantine Discs.

Although their main base is Chicago, none of the members are city natives – Andre is originally from New York, while Terence is from Florida. Initially they were both in a gothic-folk band called Unlucky Atlas (which also included their wives) and Andre was also in a heavy metal band called Break Of Dawn. Eventually, however,  their desire to meld together experimental music, hardcore and heavy metal led them to an idea to start a new project.

Their new work entitled “Drenched Lands” came out in February of 2009 as a joint release between At War With False Noise (Scotland) and Small Doses (US) labels. According to band members, the CD is a “blown out landscape, an environment in distress”, which was inspired by non-music sources such as Samuel Delaney sci-fi novel “Dhalgren” and Andrey Tarkovsky visual masterpiece “Stalker”.
Capital Punishment website described the release “a minimal and gloomy urban journey, encompassing the sparsest of drone, ambient metal and even some post rock sensibilities.” with its sound being full of “atmospheric washes of hums, clean guitar, reverbing synths and the subtlest of screams.”. CP compared the sound on CD with the work of Culver, soundtrack composer/director John Carpenter, Tangerine Dream and Nadja.
Gradations Of Morbidity website pointed out that the artwork might lead one to believe that this is a “heavier, riff driven end of doom-metal”, while in reality its a bit more subtle than that. According GoM, Locrian “are influenced by Aleister Crowley and have a penchant for flirting with the occult, given the blackened vocals, darker electronics and harrowing atmospheres within their loop driven gloom.” GoM also compares the band’s work to that of Halo Manash and Keith Fullerton Whitman. In the end, they concluded that the record is interesting not only because it represents a work of two DIY labels, but because it envelops the listener in its “sea of awesome drones and harrowing blackness.”
Members:
Andre Foisy (Break Of Dawn, Unlucky Atlas)
Terence Hannum (City Of Liars, Unlucky Atlas)
[/nextpage]
[nextpage title=”Discography” ]
Greyfield Shrines LP (Diophantine Discs, 2008)
Plague Journal 7″ (Bloodlust!, 2008)
Rhetoric Of Surfaces CDr (Bloodlust!, 2008)
Ruins Of Morning (Plague Journal) CDr / Cass (Crank Satori, 2008 / Catholic Tapes, 2008)
Locrian / Colossus Split Cass (Heavy Nature Tapes, 2008)
Drenched Lands CD (At War With Noise + Small Doses, 2009)
Locrian / Katchmare Split 7″ (Pilgrim Talk, 2009)
Compilation Tracks:
“Gruen Transfers” on No More Noise (Scissor Death, 2008)
[/nextpage]