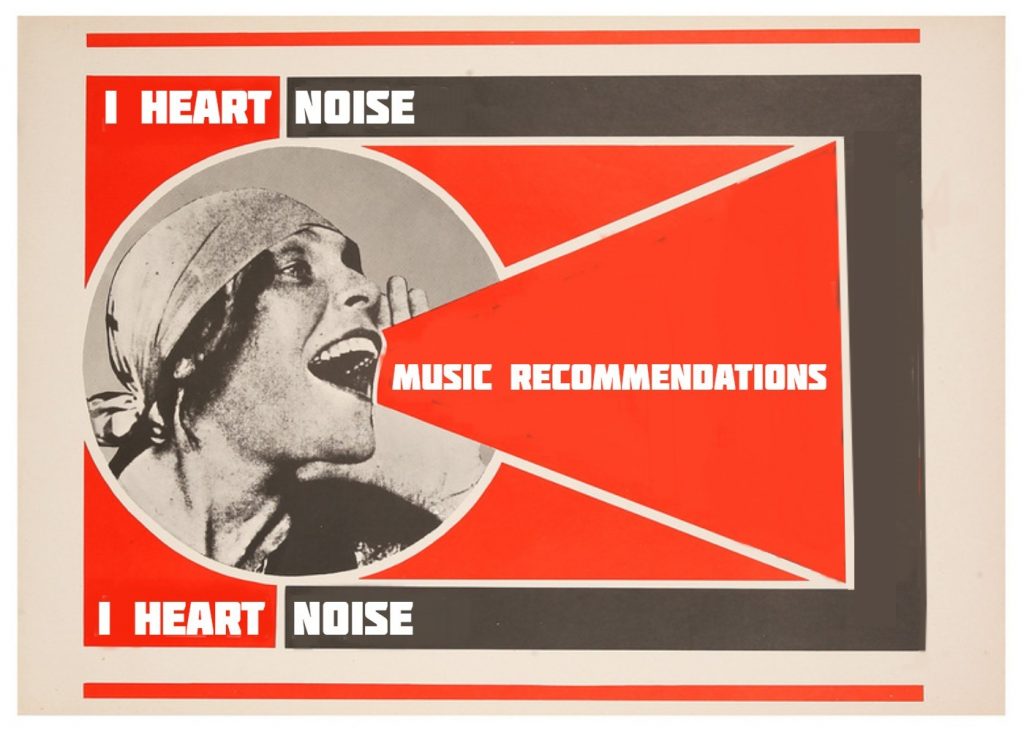 Checking in with our followers on music they’ve been listening to this month (again)!

​”Gwrth-gitâr is free playing in the sense that anything goes. It does not explicitly reject standard Western tuning, melody or harmony, but it does reject the need for such things. It seeks to explore new ways of using a traditional and universally familiar object to paint an alternative view of the world. It is improvised, unrehearsed, and leaves as much to chance as it does to the ability of the operator. It has no interest in being reproducible”

Loving this. Manages to be trancey, psych-y and heavy all at the same time.

Revisiting my older Panabrite @normchambers albums and realizing how great this one is. Infinite mood here.

Channeling humanity’s desire for transformation via annihilation, DEBBY FRIDAY returns with her second EP and what she calls a “rock-and-roll revival.” With boisterous vocals, industrial flavour and cacophonous production, the sound of ‘DEATH DRIVE’ is loud and electric; broadcasting a message of grief and salvation. DEBBY FRIDAY’s debut ep, 2018’s ‘BITCHPUNK’ received praise from underground and independent outlets, including The Needle Drop and FLOOD Magazine, as well as garnered her admirers such as rap trio clipping. For her followup, the artist dives deeper into punk rock, gospel intonations and heavy noise, showcasing an evolving sound while still retaining a dancefloor accessibility. It is evident that DEBBY FRIDAY intends to meet impending doom full force and head on.

Chancletas D’Oro, XUXA SANTAMARIA’s third release and second full-length LP, is a loose concept album focused on exploring femme and womxn narratives drawn from both history and works of fiction. Side A employs reimagined myths, fables, and original fictional narratives to create songs that challenge or obfuscate the received ideas around feminine agency, motivations, and desire.

How Not To Disappear (Completely), by Pepo Galán https://t.co/bZts2ri1yo pic.twitter.com/DFtQtRXPLu

This album is about light. You can turn it on and off. And that's funny. https://t.co/iVskXV6i9Q

This is absolutely splendid. Reels you in with a steady sense of simplicity before gradually melting your brain. https://t.co/LbKFMNMewK

I first came across the Irish folksong 'She Moved Through The Fair' in the beautiful version by All About Eve. It became one of the songs I've played most often in live solo performances. We've just… https://t.co/lEnbPj9cDb

I made this album with sticks and glue and it sold 14 million copieshttps://t.co/JGVCFVkdpa

Today we're reminiscing about Errata, a comp we made in tandem with the wonderful @timglaset. We were honoured to commission a track from our fave game music composer, @disasterpeace 🤖 https://t.co/4rAyzI8zrr pic.twitter.com/tBuWGghwnJ

ohhhh, you've got to carry that weight! https://t.co/JEdAxzxtW0

In the meantime, hear this:https://t.co/yTg1uf6dJi

Listening to this for the first time in who knows how long. Such a bonkers album. No-wave post-hardcore freakout with, like, klezmer. https://t.co/e5AR8FUbtd

Song of the day. First Beat Happening I ever heard, via the Yo La Tengo cover. https://t.co/GPRdbDU4Ij

Another great from the archives…

Tomorrow Was The Golden Age, by Bing & Ruth https://t.co/lUZtYakSVS pic.twitter.com/elsfafDkU1

Just finished playing this album and although (or because?) it was different than what I searched for, I enjoyed it very much.https://t.co/oEb4SZS9lK

I wrote the lyrics to this track in the shadow of Didcot power-station back in 2000. Definitely one of the songs that I was involved in that I’m most proud of #didcotpowerstation https://t.co/nUDvEcNRTN

It’s only the 1st anniversary of our very 1st release!

We’ve still got some copies, snag a bit of BH history while you still can!

Thank ‘Punching Bag’ on cassette! An exclusive cut from Bo Gritz! We were wide-eyed with innocent wonderment back then😇https://t.co/4m7Mi0AXxl x pic.twitter.com/AQaLlX4lXb

today's playlist is three tracks long (and brought to you by @CursedSummon, kevin druMM and @Unseen_Worlds) pic.twitter.com/GaIbBHrM4g

I've been enamored with @NSNatureTrust for years, which is why I pledged to give them half of what I earn from this collection. I'm sending them an installment soon. So if you've been thinking about grabbing these waves, now is a good time. Album is PWYC. https://t.co/e9rGXwSeI2

After a week off, back on the radio dial tonight! 🖐 🤚

The anti-war 1985 song "The Cheerleaders" by iconic San Pedro band the Minutemen. Written by the late D. Boon. From the Project: Mersh EP. Dig the unexpected but well-suited trumpet part.

"Do you have to see the body bags before you make a stand?"https://t.co/hCCzxoKf0y

All around the World (recorded in India, Gambia, Australia, France and Japan)
by Recorded by Oz Fritz
(@SubRosaLabel): https://t.co/iKszOmVtCC