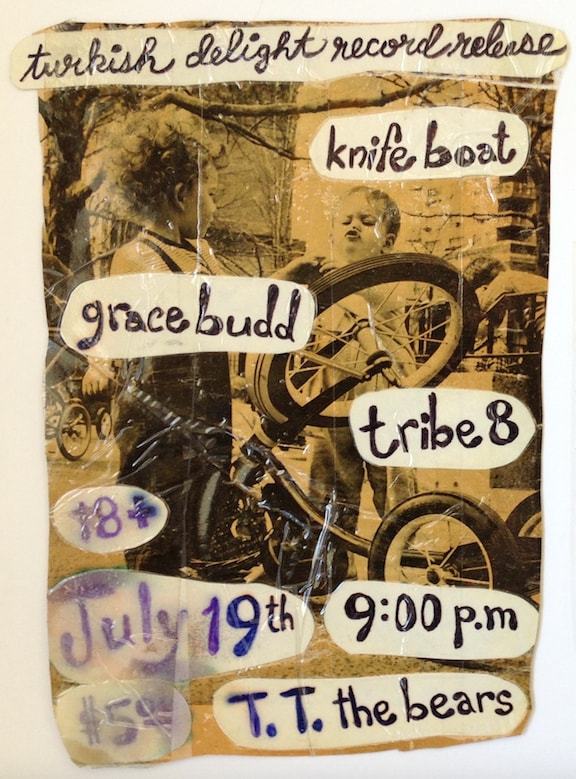 Howcha Magowcha, the second album by Turkish Delight, originally released in 1998 (and which follows IHeartNoise’s cassette rerelease of their 1996 debut last year), isn’t quite as weird as all that, but it’s hardy accessible or mainstream. In the main, it’s a high-octane, helium-filled punky thrashabout, and really rather fun. And while punk-pop has very clear connotations in contemporary terms, aspects of Howcha Magowcha belong to the time when indie bands like Voodoo Queens and Rosa Mota and Huggy Bear were cranking up the amps and revelling in the juxtaposition of ramshackle punky noise delivered with a pop sensibility. And Howcha Magowcha is bursting with tunes – all delivered with a spiky, angular energy.

2 years ago we celebrated the reissue of Tommy Bell, 1996 debut from Boston’s Turkish Delight, with a series of mixes entitled Tommy Bell and His Minions. The idea behind mixes was that we would take one track by TD and build a mix out of songs we think might be spiritually related to it.

Now we’re kicking off another series of mixes – this one dedicated to Howcha Magowcha, reissue of a second/final TD album that originally came out in 1998 on The Archenemy Record Company. Volume 2 is dedicated to the track All Choked Up and Volume 1 (dedicated to the track Go Baby) can be found here.
We also got some great news to share – British label Reckless Yes made an announcement about the upcoming reissue of both Turkish Delight albums on CD!

Pulled out a favorite of Thurston Moore and tipped as the missing link between Belly and Sonic Youth the furious experimental noise rock of Turkish Delight’s albums is broken by intriguing vintage sample interludes and from the off make obvious the oversight that they didn’t find a bigger audience in the ‘90s or in the intervening years.

Safe to say, its hard to contain our excitement about those news! Read about the label’s roster here.

Any band that cites influences as sonically diverse as Brian Eno, the Residents, Fred Frith, the Ex, Cecil Taylor, Contortions, Polvo, Dog Faced Hermans, Pharaoh Saunders, Eno, Sonic Youth, Zeena Parkins, and Peter Brötzmann (for starters) is bound to be difficult to pin down, but what’s so surprising — and refreshing — about TD is how adeptly they spun those influences into something uniquely their own.
Warped Reality Magazine

Hail Citizen play guitar-driven, powerpop/folk rock mix with plenty of hooks and memorable choruses, all held together with a dose of noise, a dash of twang, a relentless beat and a generous heaping spoonful of harmony. It’s Wilco-meets-Elliott Smith-listening-to-Loaded-era-Velvet-Underground.

Too Much for the Red Ticker

Punish or be Damned

Further Reading: Dig Me Out | Caught in the Mosh

Leah Callahan has been in some of Boston’s finest, most memorably skewed pop ensembles —from the expressionistic, strangely optimistic No-Wavers Turkish Delight through to the jazzier Betwixt (who, in addition to their own loopy originals, did a mean Lee Hazlewood cover) and her own, charmingly eclectic solo material. Ever enterprising, in-between bands Callahan drew on her attraction to theatrical outsiders to create, aided by co-conspirator Jonathan Vincent, a ribald reworking of Genet’s The Maids that had its Boston premiere at notorious drag bar Jacques’.
Her new band, The Glass Set, isn’t quite as cabaret-centric, but the echoes remain in Callahan’s arresting, honeyed vocals. The music, however, is noticeably moodier, a driving, hook-laden, sometimes aggressive, sometimes lyrical sound anchored by ringing guitars and downtempo synths. (Think equal parts Mancunian gloom, No Wave skree, and effervescent pop confection.)
Warped Reality Magazine

How I Became Invisible

Where is My Mind?

Good for Some Reason

Rachel in the Dark Room

How Much Many More

The Way of Tea