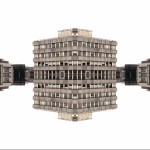 See also: Twitter Thread
The dumping of Skullflower from the lineup of essential UK psych/noise fest Raw Power certainly seems to have kicked off a lot of social media threads, but this is just the latest flare-up in a battle for the hearts and minds of various subgenres of industrial and metal which has been carrying on since Throbbing Gristle put on the camo and started singing about Zyklon B.
The evidence against Matthew Bower seems pretty convincing that he has crawled down some sort of far-right rabbit hole (see this partial summing up in the Quietus), but questions have been raised about where we draw the line here, both in regards to “guilt-by-association” and historical precedent. So let’s have some context:
Since the first teenager crawled out of the primordial swamp of the 1950s, The Kids have wanted to stick two fingers up at The Man. Some of those in the US & UK (e.g. Hells Angels, Ron Asheton of The Stooges, Sid Vicious, Siouxsie Sioux) took the route of appropriating the symbols and fashion sense of the Third Reich. While some of them probably were racists (that’s another box of frogs I’m not getting into now) I think most people agree it was for shock value.
Throbbing Gristle took things to the next level, as was their MO, coming from a performance art group keen on public blood enemas and all that fun stuff. BUT they mainly used the aesthetics of totalitarian/fascist imagery i.e. the symbols and uniforms were original or ambiguous and they used them with the purpose of ‘holding up a mirror’ to society’s worst impulses and aspects (hence the fascination with murderers and child rapists etc). Whether any of this was big or clever is up for debate and an essay in itself.
Of course the curse of all new innovative music scenes is the wave of bandwagon-jumpers who just don’t get it. While Whitehouse doing a song about the Yorkshire Ripper might be tasteless, Sutcliffe Jugend doing a 10-tape box set excoriating his victims moves from Ripper Territory to Absolute Dickhead Territory. Forty years later, a good proportion of the old school have grown up a bit and recognise these artistic approaches as being either ‘of their time’ or a childish shock tactic. Philip Best was a 14 year old spotty wanker when he put out the ‘White Power’ tape on his Iphar label – he freely admits now that it wasn’t his smartest move.
In the 21st century, using fascist symbols and death camp photos has absolutely nothing new to say, and the people doing it generally have all the originality of an Oasis tribute act. Or are actual fascists.
Anyone who has been keeping an eye out for a while and taking an interest in the subject will know that far-right tactics and philosophy has changed radically in the past few decades. Blatant bigotry and the frontal approach were out for a long time, only recent success in warping mainstream politics towards their views has brought them into view again. The watchwords were entryism and ‘metapolitics’. This is an essay focused on the music scene, so what does this mean for us as artists and fans?
Well, it means that far-right groups have targeted fringe areas of culture as recruiting grounds for their cause. And don’t be fooled – they may be racist scum but they’re not stupid. There are many forums and online guides giving advice to would-be recruiters on how to normalize extreme right ideas on a sliding scale. Even Hitler had to work up to “hey guys, let’s exterminate the untermenschen”. Like it or not, the edgy nihilism we all know and love in scenes such as power electronics or black metal does attract the sort of disaffected angry young men who are the natural prey of the death cult recruiter and there are people who are adept at trying to move people from fascination with Nordic culture to a belief that Nordic culture is superior (as an example).
How do we deal with this? I think a two-pronged approach is the way:
First: be vigilant and challenge white supremacist ideas when they arise. Shine a light into the dark corners and expose people spreading this poison in our scenes. Knee-jerk callouts don’t benefit us here, so use some discretion, but be aware of how slippery fascists can be when camouflaging their activities. Claims to be “apolitical” or “only in it for the music” are cowardly cop-outs or even covers for far-right activity. Funny how it’s so often only the anti-fascists who get the vocal criticism for “bringing politics into our music”. Everything is political and fence-sitting is a political position – a defense of the status quo and a willful blindness to the problem.
Secondly: raise up vocally anti-fascist bands, zines, websites, labels. Build solidarity and networks. We may not all see eye to eye, but surely opposing fascism should be the default position for any empathetic human? The painting of anti-fascism as a far-left idea is a radical shift of mainstream political thought to the right and must be resisted. The broader the consensus we can generate, the better. There are more of us than there are of them!
https://www.youtube.com/watch?v=sMqrUiIdU1s

5 thoughts on “If You Don’t Like Fascism… // Beginner’s Guide to Noise, Punk and Industrial”

Video Premiere: Astral Swans - Kids Came By and Burned Down the Scene

Fri Apr 26 , 2019
Spread the love Nearly every single one of us went through a moment in life, where we watched or heard something and instantly asked our […]